The Crunk Feminist Collective (CFC) is on a mission. By Meaghan Walsh Gerard.

The Crunk Feminist Collective isn’t your average blog. Penned by authors Brittney C. Cooper, Ph.D., Robin M. Boylorn, Ph.D., and Susana M. Morris, Ph.D., the collective dives headfirst into discussions on academic and political philosophy—with a dash of everyday issues. Their debut book, also titled The Crunk Feminist Collection, is a celebration of those discussions, which highlight today’s talk and glorify their favorite music genre: hip hop. With their new book in tow, the trio moves down South for a visit at Armstrong State University on March 30.

Ahead of the CFC’s Savannah debut, we asked Brittney C. Cooper, a few questions on defining voice, ideas and a generation.

Brittney C. Cooper:  We begin typically with the idea that hip hop is composed of multiple generations, beginning with those born around 1965 (per Bikari Kitwana’s formulation). Often, because we were reared in the 1990s, we consider ourselves middle children of hip hop.

Our work builds on the work of hip hop feminists, rather than on rappers or emcees. Hip hop did not just give birth to music. It gave birth to whole generation of creatives (poets, writers, filmmakers, etc). Thus, as we mention in our mission statement, we follow the critical and pioneering work of women like Joan Morgan, who invented the term “hip hop feminist” in 1999, and we are also helped along as scholars by folks like Gwendolyn Pough and Tricia Rose, who wrote some of the earliest scholarly treatments of women in hip hop.

A few things are different about our work: we root our politic in Southern hip-hop music and Crunk Aesthetics, which shifts hip hop out of its origin point in the Bronx. We argue that there is something generative about the bass-laden culture of Southern hip hop that makes you want to move your hips. Essentially, we see the joy that is created and reveled in on the dance floor as an essential component of a liberatory politic.

We also assert that we can both love hip hop and be anti-patriarchal. In other words, we refuse to give up the cultural soundtrack of our generation, and we take this stance while maintaining that we can be critical of problematic and misogynist elements of hip hop culture at the same time.

SM:  Generationally, your work can be seen as a bridge for these ideas. What do you see in the younger generation, the ones you will be handing this work off to someday? How do they approach and think about these issues?

Cooper:  Frequently young 20-somethings say to us that the CFC blog was critical to their own politicization. It was the first time, they tell us, that they saw someone grappling with contradictions and tough issues in a way that made them feel seen. And more than one person has talked to us about the CFC as a project that saved their lives.

SM:  The book is a collection of essays written by your contributors. What are you looking for when you edit a collection like this? Topics that are evergreen, rather than tied to a specific incident?

Cooper:  The Crunk Feminist Collection is a mix of classics and of essays that speak to a particular time period. Much of our work at the blog has been about responding to issues in the moment, and we do some of our best theorizing by thinking about the particularity of certain cultural moments. At the same time, much of the feminist life advice we give, (in pieces like “How To Say No”, “Back to School Beatitudes” and “Dear Patriarchy”) continue to feel as if they could have been written in this moment.

SM:  For a reader unfamiliar with the work of the collective, what can they expect to find in these essays, and at your discussions?

Cooper:  Our goal as a collective has always been to move feminist conversations from the academy to the space of a cozy sofa, with a few good homegirls and a good bottle of wine. This is what readers can find in these essays. Heady and complicated feminist concepts rendered in a way that everyone can relate and find something useful.

And if they come to our talks, they can join us in what is an ongoing conversation about the power of feminism, the power of hip hop and the power of popular culture to reflect our deepest, and hardest, and most painful, and most joyous truths.

The Crunk Feminist Collective will be at the Ogeechee Theater at Armstrong State University, Thursday, March 30, 6 p.m. Free and open to the public.

I don’t have a lot of friends who identify as feminist. My nonacademic, nonactivist friends don’t see themselves as feminists, don’t call themselves feminists, don’t all the way understand what it means. They spend a lot of time trying to resist myths around being Black and a woman, and don’t have the energy or motivation to also resist myths of feminism—of bra-burning White women who hate men and stand in picket lines, or bourgeois Black women who understand the theoretical nexus that connects their lives to “the cause” but become disconnected from movements close to home.

Feminism as a term was born in academe (in an environment that polices people’s behaviors to dictate who can and cannot be femi- nist and what is and is not feminist). Feminism was conceived at my mama’s house (in a space that made woman power and intentional equality a survival strategy and mechanism to make up for oppression, the absence of men, and lifestyles that were without the luxury of adhering to strict gender scripts).

I learned feminism from my mama and them, rural women who did not have the benefit of formal college education or fancy words for how they lived. They would, no doubt, by strict standards, in the vulnerable moments of their lives that were necessary for sanity and survival, have been called unfeminist while the world called them unfeminine. They would have had little investment in either label, learning from experience how dangerous it is to let outside people dictate your inside thoughts. They would have been resented by traditional feminists for the way they were conditioned to desire men and canonical lifestyles while being single parents to multiple children, fantasizing about whitewashed happily-ever-afters. Their lifestyles were feminist, but their dreams and desires, for being kept women with White women’s problems, would have been read as problematic. They would have rebelled because they wouldn’t let a label like feminist tell them what to do. They wouldn’t give a damn what people thought about them.

I learned/realized I was a feminist from a teacher who described my mama without saying her name, gave her secrets away without giving her credit, and put struggling on a pedestal. Feminism became a metaphorical stepping stool, giving me access to the self-actualization I would have otherwise not known to reach for.

I got my feminism from my mama, even though she doesn’t know it. And my grandmother. And my aunties. They had a feminism that would fight back and hide behind the mask of smiles or scorn. My mama’s feminism was wrapped up in God and respectability politics she could never live up to. She taught me to have mustard-seed faith. My grandmama’s feminism was housed in her meanness and caution. She carried it with her for emergencies and protection, like the cigarettes in her pocket and the gun in her bra. She taught me how and when to fight. My aunties held their feminism in their laughter and occasional anger. They used it to cover up pain. They taught me to get mad, but not stay mad. My mothers didn’t know they were feminists. They didn’t mean to pass it on to me but they couldn’t help it.

My feminism needs space to breathe and room to stretch out. My feminism never gets old. It is quiet sometimes. It listens to hip hop and gospel music, watches soap operas, and likes to be listened to. My feminism shows up in the bedroom and the classroom. It asks for what it wants, doesn’t apologize for what it needs, and isn’t afraid of being alone. My feminism is androgynous. It loves football and basketball, and dances when no one is looking. My feminism is soulful and historic, sexual and conscientious. It is standoffish and suspicious. My feminism needs to drink more water.

My feminism is not always right, but it’s never wrong. My fem- inism has insomnia. My feminism gets tired. My feminism is anti-racist, antisexist, and conscious of class issues. My feminism knows what misogyny means. It takes days off. It tells people off. 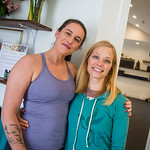